The mysterious affair of the brown Rumex soap... 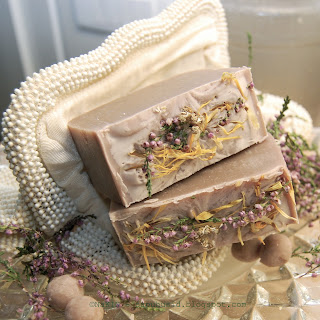 Puzzled by my brown soap, I thought that maybe I hadn't used enough Rumex oil.  I generally use about 15-20 grams (0.5 -0.7 oz) of the infused oil in one recipe.  My recipes are small, either 500g or more usually 700 g (about 25 oz.)  The obvious solution was to use more oil, maybe double it, and see if that would change the color to pink.

So I did.  But it didn't.  Still stuck in the thinking that yellow and pink somehow go together I threw on some dried calendula and calluna, with a bit of yarrow.  It probably looks better on the brown background than it would on the intended pink,  but I will not be repeating that combination any time soon.  I scented it with Bensoin, Sweet Orange and Geranium.  Tha was a nice combination, which I might repeat.  The Soap was Olive oil, Coconut oil, Soy bean oil and Cocoa Butter.

I love the brown color though.  It's just really nice.  I sometimes forget how nice brown can be, I tend to think of it as a dull color, but it is so useful.  And lots of things that I like are brown.  Linnen is mostly brown.  Most of the eyeshadows that I can use without looking ridiculous are brown and eiderdown id brown.  Don't let anyone tell you otherwise.  I saw somewhere that the way to recognize Eiderdown is that it is always white.  That is nonsense.  The female Eiderducks are brown and therefore the down can only be brown.

I've been cleaning the Eiderdown myself.  I found out that if I have it cleaned by machine I will only get about 20% out of it.  That is an average number and it could be more or it could be less.  But I think that the process the down goes through in the machines is bound to waste some down.  It basically means that my 3 kilos would only yield 600 grams, and that isn't enough for a duvet for me.  I was hoping to get 40% by hand cleaning, but I think that is a bit optimistic.  I have now cleaned just over 70 grams.  So 7% of the duvet done.  Oh, well.  Some things are worth waiting for.
at January 29, 2012 8 comments: Links to this post

The Surprises of Nature 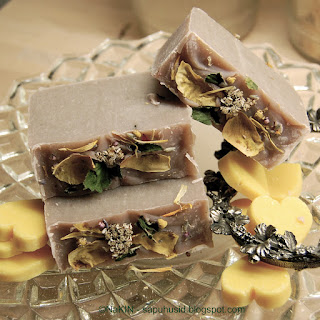 December was cold.  We got a lot of snow for Christmas, which was incredibly nice, but now it just feels like it has been snowing forever.  In this weather I just want to snuggle up in bed, preferably under an eiderdown.  It is amazing to me to think that in late November I was out on the allotment, building raised beds and digging manure and seaweed into the soil.  There was quite a lot of weeds that I had to get out before I dug in all the goodness, so I was actually weeding.  At the end of November!  That's a new one to me.

Fortunately Dock is a very common weed in the allotment ground, to the dismay of many people, and my delight.  I dug up quite a few fat and beautiful yellow roots.  This is the most perfect time to dig up roots, when all top growth has died down and all the goodness of the plant is stored in the roots.  Next best thing is this spring, just before the plant starts to put on new growth.  This, by the way, applies (very logically) to all roots.

I still had a little bit left of the dock oil (my dock is Rumex longifolius, but most species of dock have the same properties) that I first infused.  It's colour, dark and glorious, had always produced pretty pinks in soap.  So I was eager to chop up some more roots and infuse more oil.  The oil is reputed to have many benefits for the skin, but I would use it even just for the colour only.  But it takes a while, about 6 weeks, for the oil to acquire the goodness of the root.  It's lovely to watch the gradual change in colour, from the light colour of oil to the dark yellow, with a strange tinge of green that almost reminds me of the play of colours in an oil slick.  Since I wanted some oil for my Christmas soaps I used what was left of my old oil.  It was quite good still, no sign of rancidity, but I had kept some root in it for a lot longer than the 6 weeks and it was very dark and had the characteristic smell of dock root.

Well, surprise, surprise.  I didn't get pink.  I have read that some people only get a brown colour from dock and that has puzzled me.  Mine just turns a light beige when I add the oil and stays that way for a few hours and then, just like magic. it turns pink.  Except this time it didn't.  It was a nice grayish earthy brown.

Fortunately I had decorated it with yellow rose petals (I know - yellow and pink? What was I thinking) so it actually looked really nice.  This recipe was pretty standard, 40% Olive oil, 30% Coconut and 10% Cocoa butter and I forget what else.  I haven't done my January organizing yet, I just barely managed to take down the Christmas decorations.  Come to think of it, I think I never do any January organizing, but it sounds like a good idea.  But I remember that I scented with Lemongrass.  I thought it looked good with the yellow rose petals.  And why I thought this would look good as a pink soap.  Hmm, I'll never know.
at January 20, 2012 3 comments: Links to this post 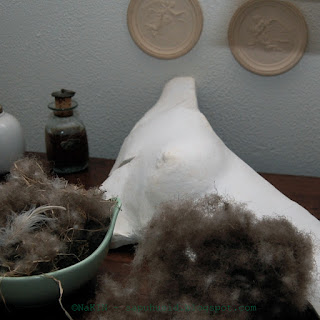 I am the happy owner of 3 kilos of uncleaned eiderdown.  I originally bought a small bag, perhaps 600 grams, of Eiderdown at the Good Shepherd, a local thrift store.  Even if I knew that, cleaned, it would yield only 300 (10,5 oz) grams and a duvet for a full grown person requires 1000 grams (or 1 kilo/35 os/2.2 pounds) I thought it was worth it.  I had to pay a bit of money for it, probably about 60$, but Eiderdown is incomparable when it comes to duvets.  Mine is old and getting to be rather thin.  So I had the idea that I would start to collect eiderdown for the duvet that I would have for the rest of my life.

Just before Christmas I was lucky enough to find some more Eiderdown at the Good Shepherd.   This time it was 2,5 kilos of uncleaned down so I knew that I had all the down I needed for my new duvet even if more than half is straw, seaweed and feathers.  I couldn't believe my luck.  And this time I only had to pay around 40$, making the total outlay for the down about 100$.  Eiderdown is truly a remarkable material.  Somewhere I saw it described as the Fabergé egg of comforters.

Eiderdown is gathered from the nests of Eider ducks, Somateria mollissima.  The female ducks pluck their breast in order for their warm body to get in better contact with the eggs and then arrange the down in the nest itself to insulate the eggs from the cold Icelandic summer.  Farmers watch over the nests, protect the ducks from birds of pray, fox and mink and in return carefully remove a small amount of down, replacing it with straw which keeps the nests dry.  It is generally a happy arrangement for all.  The 4-5 ducklings go to the sea with their parents when they are old enough and the parents return each year to the same nest.  The eiderdown is left for the farmer to pick before it is blown to sea.  Each nest provides less than 20 grams of down.  So it takes down from more than 50 nests to make one single duvet.


I started to clean the eiderdown just after the New Year and soon realized that it would take me absolutely ages.  One needs to go over the down very carefully to extricate the delicate strands of fluffy down threads from straw, moss and a few feathers.  After spending every evening for a week, I weighed the results of my hard labour and lo and behold, I had almost 20 grams cleaned.  That is 2% of the weight I need for the whole duvet.  At the same speed it would take me a year to fully clean all the down.  I now understand why an eiderdown duvet costs thousands of dollars.

I have found someone who will clean the down for me in a machine.  It doesn't cost very much, but picking the feathers has to be done by hand and I have to do that myself.  It takes a skilled worker almost one day, so it'll probably take me a week.  But I'm actually quite excited.  I would prefer to clean all the down myself, but it takes too long.

I am now in the process of trying to find down proof silk to sew the cover.  If I'm to have this perfect, most light and fluffy material I need it have have the most glorious fabric cover.  I read somewhere that silk has the same thermal qualities as the eiderdown.  I have been admiring some photos on the internet that I have have found of vintage duvets.  They have the prettiest flowery material and I have to admit that I would love to find something like that in 300+ count silk.  The traditional color for duvets here in Iceland is a mid blue cotton.  It's nice enough, but I think I have to find silk for this one even if it won't be flowery.  I can't wait to get my new duvet.  I'll probably never get out of bed.