Lavender - Last One of the Year 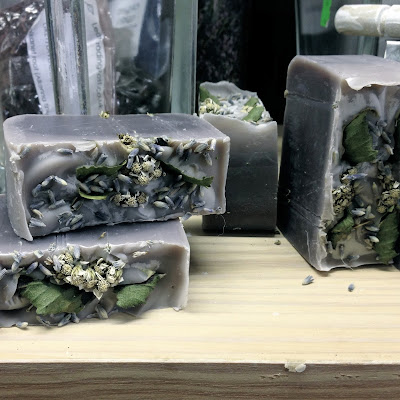 I just had to make a Lavender soap if only for the Grandmothers.  I don't dislike Lavender, but it's not a great personal favorite, but I know that many people really love it.  That includes the family's grandmothers.

I continued with a similar recipe to the ones I had already made, determined to use both Lanolin and Jojoba, but this time I also remembered the Cocoa Butter that is sitting on a shelf in kitchen.  Since I don't have steady supply of lard, I thought it would be a great addition to the recipe to make the soap harder.  I also had some Shea butter that I added to it.  One of the grandmothers loves that.

For colour I turned to the Alkanet infused oil that I have, lovely and dark red, ready to give it's blue to purple colour as soon as it comes in touch with the alkaline caustic soda. I never tire of the colour magic that soap making is.

I made these big generous chunks of soaps and the recipe turned out to be:

I used water with a teaspoon of sugar.  And to continue the theme I decorated with Achillea flowers, Lavender flowers and Birch leaves.

The grandmothers got their soaps for Christmas. One of them remarked that the saves hers for special occasions and was just running out.  It pleased me that she would get a new one.  But this year, rather than give soaps as presents for christmas, I had people choose some to take with them when they left the Christmas dinner.  I still have enough left for me and plenty of soaps begging to be created in the New Year, among them a Vanilla soap and there is is definitely a Yellow one on the horizon.

Happy New Year and very best thanks for the one about to pass.
at December 30, 2013