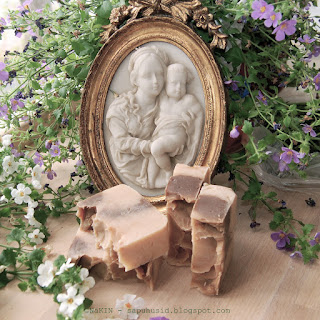 I love vanilla scent and I have used up all my vanilla soap so I had to make another one.  This time I thought I should combine it with some flowery scent (Neroli is my favorite) because Vanilla can be a tad too sweet on it's own.

For those lovely scents I thought I should try Madder root again.  I have used it a few times and of course the challenge with Madder is to get the blueish red dyes to appear.  Apparently Madder has five different dyes ranging from yellow through warm red and brown to blueish red.  The dyes are sensitive to PH, blue reds appearing in an alkaline environment and the warm reds in acidic solutions.

Since Madder root is water soluble I decided to give it a long time in the caustic soda to try to extract the maximum amount of dye.  I have read that one should rinse the root in cold water to wash away the more yellow dyes, so I did that.  I also decided that I would add it quickly to the lye solution while it was still quite hot to see what effect heat had on the Madder, hoping that it would extract more colour.  I let the madder sit overnight and soaped at room temperature.  When I combined the lye and the oils the Madder showed it's lovely blue reds, but very quickly turned to peachy coral.  I think that colour is fashionable right now, so I didn't mind.  Madder seems to want to be warm coloured in soaps and that's the way it is.

The idea was to take a part of the Madder coloured soap and add Vanilla to it and that part would turn brown and cover the Madder colour.  I had also planned to attempt a fancy swirl, and use a cardboard separator in the middle and all.

The reality was that I had started to make the soap without setting up the molds first and it took a while to line them and cut the cardboard and then the soap started to seize.  So much for my ambitious plans.  I used Neroli essential oil with a touch of Benzoin, ylang ylang and a small splash of Cubea Litsea.  I was a bit surprised since I was soaping at room temperature, but soaping is unpredictable and I think that is what makes it so fascinating for me.

But it smells devinely and I love the feel of it on my skin.  I used the last of my Almond oil, so I need to order some more.  It is really nice in soap.

The recipe I used this time is:

My fascination with natural colour has taken me a step further and I am now in the process of using plants to dye wool and a tiny bit of silk, just to see what colours I can get. I'm having loads fun and have learned a lot, some of which may be helpful in colouring soap. I have for example learned that when extracting dye from roots, heat will bring out more of the yellow tints.  So next time I used Madder I will use less heat and see if I can coax it to a slightly pinker shade.
...
at June 02, 2011