This One's Just for Me 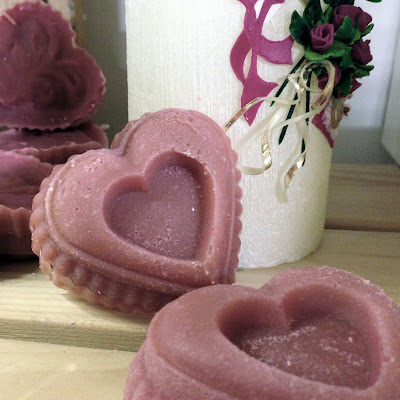 I made this very strange recipe.  I have no idea how it will turn out at all.  I knew I wanted to use lard.  I don't use palm oil mostly because I can't find it here and lard makes for very good hard soaps.

I also wanted to use up some oils that I had a little bit left of. Additonally I wanted to make soap just for myself.   Something luxurious and pretty.   A soap that I would use on my face, and therefore I wanted all those exotic oils that I normally would use in face creams rather than soap.

So it became quite a cocktail.  I'm still waiting to see how it will turn out.  It just might be an almighty flop.  But it could also become my new favorite soap.

I know this is a crazy recipe. It's not supposed to be very conditioning, but since I used both jojoba oil and lanolin, both of which really are waxes rather that oils, I'm counting on them to do the job. Plus this is more superfatted than I usually do.

The thought with this soap (if there was any, I did this pretty instinctively) was to make something similar to my old facial soap that I did ages ago. That soap seemed to take forever to cure, but turned out to be one of my all time favorite soaps. And that one aged quite well too.

Lye - 2oz / 58g which makes it 15% super fatted, but always check a lye calculator (I always use Soapcalc myself).

For fragrance I used Neroli, Ylang Ylang and Benzoin, with a dash of Rosewood, Sweet Orange and a dash of Geranium, Vetiver, Sandalwood Amyris and Cubea Litsea.   I put it in this silicone cake form that I got in a thrift store (and have never used for cake) as well as my heart shaped ice cube mold from Ikea.   I like to have small soaps for the bathrooms.

The scent is nice and fresh and the colour also turned out to be a very nicely pink.   But this soap is also going to take a lot of curing.   Oh, well. Patience is the mother of all virtues, as they say.   I need more of that, and as they also say: Practice makes perfect.  So it's all good.

Update: Like I expected, this soap took some time to cure, but once it did it does make for a nice very creamy lathered soap that feels quite gentle on my skin.  I have also used it as a shampoo bar and my hair likes it.  The fragrance didn't hold up as well as I hoped.  It turned into a kind of indistinct something.  So even if I like that Neroli, Ylang Ylang and Benzoin combination I should probably have skipped the others or made one of them dominant.
at November 24, 2013